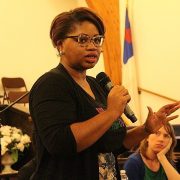 One week after a nationwide wave of populist, conservative discontent helped Donald J. Trump win the presidency and Republicans retain majorities in both houses of the U.S. Congress, community leaders called for frustrated New Haveners to work together to protect abortion rights, protect immigrants, and prepare voters for the next election.

These calls to action, along with many other words of encouragement, soul-searching, concern, and resolve, were offered Tuesday night at a post-election conversation organized by the New Haven Alumnae Chapter of Delta Sigma Theta Sorority, Inc. and held at the Bethel AME Church on Goffe Street. Read more here….Deltas’ Message: Don’t Move; Organize

Abandon All Hope? Not Just Yet
Scroll to top