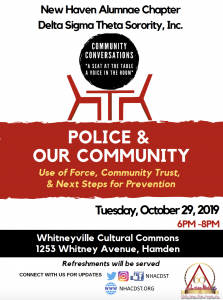 NEW HAVEN – A few years ago, New Haven police officers arrested Holly Tucker’s mother on the New Haven Green. Tuesday evening, she confronted the assistant chief who had overseen the arrest for how he had treated her.

That happened at a community conversation about policing hosted by the New Haven Alumnae Chapter of the Delta Sigma Theta Sorority at the Whitneyville Cultural Commons in Hamden Tuesday evening that ended up illustrating some of the issues it aimed to address.

The sorority invited two New Haven assistant chiefs —  Herb Sharp and Renee Dominguez —  and policing expert and University of New Haven (UNH) Professor Lorenzo Boyd, for a panel discussion on “use of force, community trust, and next steps for prevention.”

The New Haven Alumnae Chapter (NHAC) of Delta Sigma Theta Sorority, Inc. and members of the Greater New Haven community penned a letter to President Donald J. Trump expressing concerns about policies and appointments that many feel run counter to the principles and values of the country.

The letter-writing campaign grew out of a series of ongoing, community meetings called “Conversations That Matter” that have been hosted by the chapter’s social action committee since Trump’s election. (Read more about the meetings here, here and here.)

Amid all the talk about impending dangers from the incoming regime in Washington, Karen DuBois-Walton offered a glimmer of hope Tuesday night: Perhaps, just perhaps, there is opportunity in uncertainty?

DuBois-Walton, who runs New Haven’s housing authority, was one of three expert speakers at a “community conversation” on what New Haven should expect from, and how it should respond to, President-Elect Donald Trump’s recent choices to run federal departments. DuBois-Walton specifically addressed the selection of neurosurgeon Ben Carson’s appointment to become the next secretary of the U.S. Department of Housing and Urban Development (HUD). Read more here…..Abandon All Hope? Not Just Yet

One week after a nationwide wave of populist, conservative discontent helped Donald J. Trump win the presidency and Republicans retain majorities in both houses of the U.S. Congress, community leaders called for frustrated New Haveners to work together to protect abortion rights, protect immigrants, and prepare voters for the next election.

These calls to action, along with many other words of encouragement, soul-searching, concern, and resolve, were offered Tuesday night at a post-election conversation organized by the New Haven Alumnae Chapter of Delta Sigma Theta Sorority, Inc. and held at the Bethel AME Church on Goffe Street. Read more here….Deltas’ Message: Don’t Move; Organize

Philanthropy is something members of the New Haven Alumnae chapter of Delta Sigma Theta Sorority Inc., understand when it comes to paying it forward. And on Saturday, they will act as host for their annual citywide Free Market event as a philanthropic effort of serving individuals and families in need.

The event, during which items are free of charge, is scheduled to run from 9 a.m. to 2 p.m. at the Elks Club, 87 Webster St. Items have been donated by a variety of sponsors and supporters.